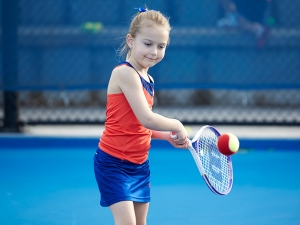 Whether you’ve been watching the Australian Open, or you’re simply navigating your child’s newfound interest in tennis, all the jargon can sometimes get in the way of enjoying the game!

To help break down the barriers, we’ve created a simple cheat-sheet of tennis terms we think everyone should get to know.

The tennis racquet is the basic tool of the game. While the original racquets were made from wood, these days the racquets are more likely to be made from graphite and the strings from plastic.

It’s yellow, it’s round and it bounces. The ball is what you hit between players. 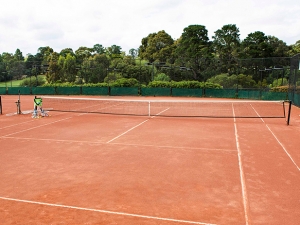 The court is where the action happens! Tennis courts can be made out of a variety of materials, although they are commonly known as hard, clay or grass courts. The exact size of the court is determined by the International Tennis Federation – although ANZ Tennis Hot Shots courts are smaller in size to accommodate kids. Here’s a cool graphic that shows you exactly what a tennis court looks like.

The net divides the court in two. The aim of the game is to hit the ball over the net and into your opponent’s side of the court.

The line at the back of the court that runs parallel to the net.

The two boxes on either side of the net. A server must serve from one side of the court into the service box diagonally opposite them.

The external court lines that run parallel to the singles lines. These lines are considered ‘out’ in singles, but ‘in’ when playing doubles.

A stroke is the way you swing a tennis racquet to hit the ball.

The serve (or service) starts the point. Players will usually hit an over-arm stroke (although they can hit underarm) from behind the baseline into the service box diagonally opposite them. A player has two serves per point, called a first and a second serve.

The shot played when the palm of the dominant hand is facing forward. For instance, if you are right handed, the forehand will be played on the right hand side of the body.

The shot played when the back of the dominant hand is facing forward. For instance, if you are right handed a backhand is a shot you play on the left side of the body.

A stroke where a player hits the ball back over the net (using a forehand or backhand) before the ball bounces on their side of the court.

A match between teams of two players. In doubles tennis, the tram lines come in to play.

A call made when a ball falls within the playing area.

A call made when a ball lands outside the playing area.

When the ball does not land in the opponents court. A fault can be called if a serve, forehand, backhand or volley lands outside the playing area.

Most commonly called when a player’s serve hits the net but lands in the correct service box. A let can also be called if a point is interrupted by an outside interference. In the event of a let a point is replayed.

A point won by the server when the receiver doesn’t touch the ball.

The aim of each game is to be the first player to score four points. Tennis points are numbered as follows:

Remember: in tennis, the server’s score is always called first. If they win the first point of the game we say 15-love. If they lose it we say love-15.

The building blocks of a set. Each set comprises of at least six games.

A set is usually comprised of six games. However, if the players are tied at five games all the set becomes the first to seven games.

In professional tennis a match is determined by the best of three or five sets.